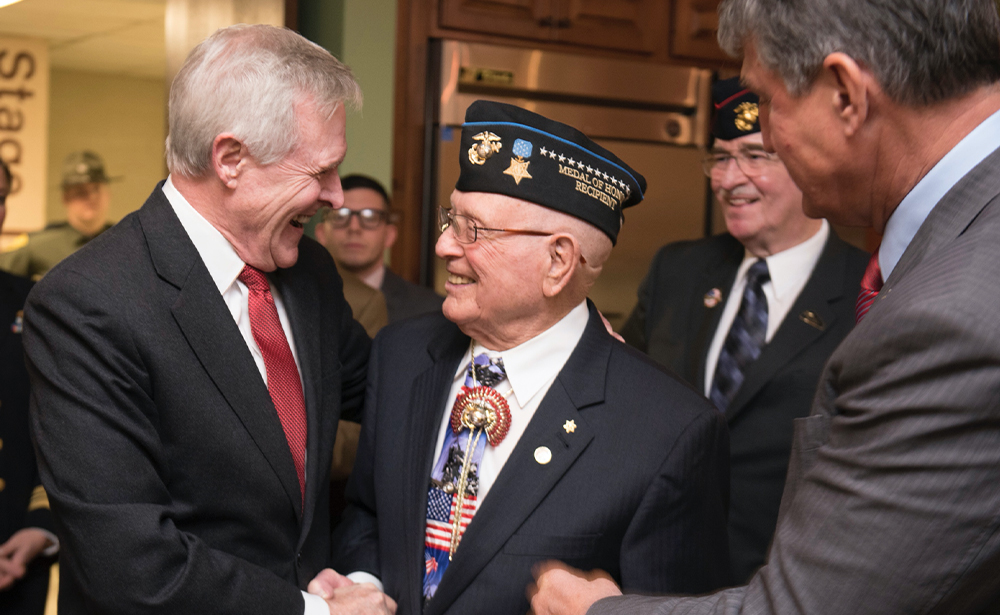 Hershel “Woody” Williams fought at Iwo Jima, one of the bloodiest battles of World War II. The commendation of his fellow soldiers and his medals attest to his gallantry.

Williams also showed courage of a different kind. After years of living with the nightmare memories of war he found peace in his life when he was spiritually changed to become a lay minster in his church and Chaplain of the Medal of Honor Society.

Born Oct. 2, 1923, he grew up in the town of Quiet Dell, Marion County, West Virginia, where his parents ran a dairy farm. He was a grade-schooler in 1929 when the economy crashed, starting the decade-long Great Depression. He dropped out of high school to join the Civilian Conservation Corps, the New Deal program that put young men to work planting trees and building trails in parks. He built fences around government reservations in Montana

When the Japanese bombed Pearl Harbor Dec. 7, 1941, Williams immediately wanted to volunteer for military service. His older brothers Gerald and Lloyd were in the Army, but Williams wanted to be a Marine. He was inspired in part by seeing how local Marines visiting home wearing their dress blue uniforms impressed all the girls in town.

At 17, he was too young to enlist without his mother’s consent. At 18, he was old enough to enlist on his own, but was 2 inches below the Marine Corps’ 5-foot 8-inch height requirement. As the war progressed, the standard became more flexible and Williams enlisted in 1943. Before shipping out, Williams got engaged to girlfriend Ruby Dale Meredith.

Corporal Williams joined the 3rd Division of the 21st Marines, trained in Guadalcanal and fought to recapture the island of Guam.

In February 1945, Williams’ division arrived on Iwo Jima, an island about 760 miles from Japan. The Japanese had riddled the island with hidden caves and sophisticated tunnels and fortified it with artillery emplacements, anti-tank guns, blockhouses and pillboxes. The fierce combat between U.S. forces and the entrenched Japanese raged for 36 days.

Williams and other Marines from his division saw the flag being raised on Iwo Jima – the image caught in a now- iconic photograph  – about 1000 yards from where they were hunkered down. The sight was inspiring, but the American forces still faced ferocious opposition. The Japanese held concrete pillboxes with slits too small for easy attack from without while allowing the enemy within a wide field of fire. Aerial bombardment could not knock out the pillboxes. U.S. forces who tried to advance on foot were decimated. Even tanks were unable to advance against them.

Due to the loss of so many Marines, his commanding officer asked Williams to try to take out some of the pillboxes blocking their advance with the flamethrower. Williams accepted.

Accompanied by four Marines to provide cover fire, Williams strapped the flamethrower to his back and crawled toward the pillboxes. At close range, he discharged his weapon to kill the enemy in the pillboxes. Each time, the flamethrower’s diesel fuel and gasoline belched black smoke, marking his location and drawing enemy mortars.

When the fuel tanks were empty, Williams returned to his company headquarters to obtain serviced frame-throwers and demolition charges. Later, Williams said he could not recall going back five times to resupply and returning to the battleground. He was reported to say that he didn’t know how many enemy soldiers he killed, and did not want to know, but his fellow Marines witnessed it.

After four grueling hours, Williams cleared enough pillboxes to allow the U.S. forces to advance. Two of the four men who accompanied him died during the mission.

The bloody conflict dragged on. In March, Williams was wounded and received a purple heart. In September 1945, the war ended.

In October, President Harry S. Truman presented Williams with the Medal of Honor, the highest military decoration in the U.S. armed services.

In interviews, Williams was reported to say that the medal represented the Marines who were with him on that mission. Four men protected him, and two died in the process. He did not know their names, but the medal belonged to those men as well.

But he was not at peace. He fought a private battle with remembered horrors of war, guilt and grief for the young men – friends and foes – who died. Men don’t cry, he’d been told as a youngster, so for years, he tried to drown his feelings in beer.

Drinking didn’t work. But talking did.

“There was no PTSD at the time and nowhere to get help,” Williams said in a 2018 article in West Virginia Executive.  “Your main source of comfort and adjustment was your family. I had taken too many lives in such a horrible way. I couldn’t forgive myself, but that was my order. My purpose was to win the war. I was forced to talk about my experience, and that was the best therapy I could have had.”

In 1962, Williams accompanied his wife Ruby to her Methodist Church and found a new mission in life: honoring and serving other veterans.

“I always say I married a Methodist angel, and I ended up in church and realized I could get forgiveness and I could forgive myself,” he said in the article. “I realized God was not holding me accountable.”

He served as a Veterans Service Representative for the Department of Veterans Affairs for 33 years.

In 2010, he founded the Hershel Woody Williams Medal of Honor Foundation. The nonprofit builds “Gold Star Families Memorial Monuments in communities throughout the country and provides scholarships to eligible Gold Star Children . .  [and] sponsoring outreach programs and events, and educating communities about Gold Star Families and the sacrifice they have endured,” states the organization’s website hwwmohf.org.